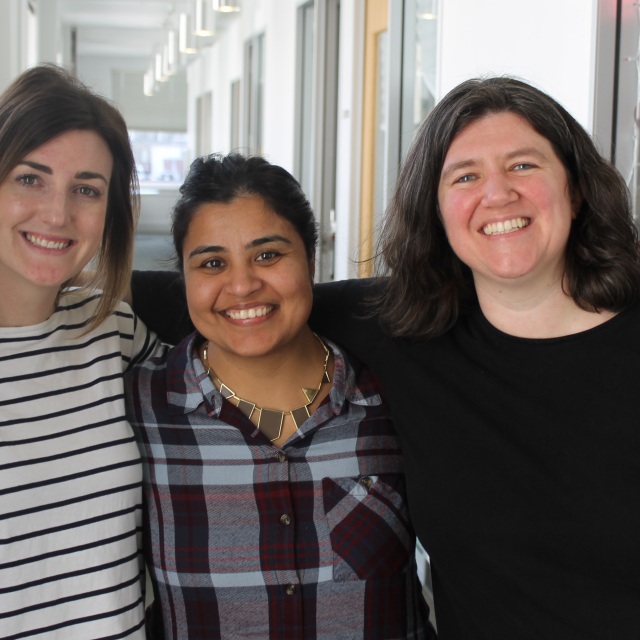 Ask the three mitigation specialists in one of the felony units at the Department of Public Defense what they love about their work, and Roopali Dhingra, Molly Hennessey, and Alix Willard speak quickly and passionately – tag-teaming each other in a flurry of words.

They’re helping people who are vulnerable. They’re working to get judges, prosecutors, and others in the system to see the humanity of their clients. They’re sometimes making a huge difference in people’s lives. And these three women – all social workers who specialize in public defense mitigation work – are never bored.

“There’s no typical day,” Roopali said. Molly agreed: “We get such a range, from serious felonies to felony DWI. That’s what I like about felonies.”

The Department of Public Defense (DPD) employs about 30 mitigation specialists, trained social workers assigned to different units in DPD’s four divisions. They’re called mitigation specialists because their job is to research the circumstances surrounding a client’s alleged crime, the client’s mental and development health, and other social-psychological information, all with an eye towards providing mitigating evidence that can be helpful in a client’s defense.

It’s challenging work, Roopali, Alix and Molly noted, but almost daily they experience what Alix called “small victories.” Getting a client connected to a therapist. Keeping the lines of communication open among defendant, attorney, and family members. Witnessing change.

They also know their work as listeners and storytellers can make a difference to clients. “A recent client asked me for one of his mitigation reports. He said, ‘Can I have my story?’ That touched me so much, because I knew it meant he felt validated and heard,” Molly said.

Such experiences motivate Alix as well. “We spend so much time in this culture demonizing people who have committed crimes that it’s easy to forget that they’re people. I enjoy figuring out who my clients are and what their deal is. … There are aspects to them as a person that no one would know if we didn’t do what we do.”

“It’s a real honor to do this work,” added Roopali.

When asked what propelled them into this line of work, they each had a story to tell.

Alix initially got a teaching certificate and taught math for a year, only to have two epiphanies that changed her life: She found she hated teaching but that she loved working with the more challenging kids, the ones “who had issues,” as she put it. After living in Washington, D.C., for a few years, she decided to get her MSW and attended NYU, unsure how she would put her master’s degree to work until she landed a school-based internship at a juvenile detention center. “I realized those were my kids. These were the people I wanted to work for.”

Molly says she discovered social work as a major during her undergraduate years at Seattle University. The university requires volunteer hours, and she decided to tutor kids at the juvenile jail just down the street from the school. “They would just pour their hearts out,” she recalled.

Moved by the experience, she graduated from Seattle University and immediately went on to get her MSW at the University of Denver, where she got the chance to be a social worker on a defense team. It was a new concept in Colorado at the time. “I was one of the first. And I was just hooked. I loved the opportunity to engage with clients on their side and to be a member of their team and to work collaboratively” she said.

Roopali entered public defense thinking she’d go on to get a law degree. But she enjoyed working behind the scenes, she said. “I also came to realize not many social workers do this kind of work, and it’s such needed advocacy.”

They talked about the challenges they face – the heavy workloads, the emotional toll of the work, the difficulty of tracking down people who could help them understand their clients’ struggles. Alix recently wrote a mitigation report while crying, she said – the story was so tragic. All three talked about fighting to get prosecutors to agree to drug treatment, about untreated mental illness, about the generational issues they see – clients whose parents they’ve helped.

But they also talked about victories, small and large – charges reduced, third strikes turned into a non-strike, dismissals and acquittals.

Roopali describe a particularly challenging case involving a young man facing numerous felony counts and the possibility of years in prison. It took her a month to track down a key family member who could help her understand his past and to get an expert who could speak to this young man’s mental health, she said. But when she submitted her eight-page mitigation report, it had an impact: The charges were drastically reduced.

Along the way, she said, she also mentored him, talking to him about self-advocacy and self-care. She plans to stay in touch with him to ensure he gets the support he needs when he gets out of prison. “Even though the case is over, I feel there’s a need to connect that last piece,” she said.

Alix and Molly both knew about Roopali’s case and were also moved by the outcome. “It was a huge victory,” Alix said. “These are the kinds of cases where we know we’re making a difference.”