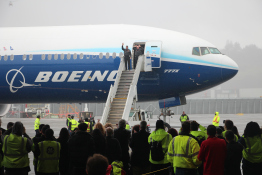 In a long-anticipated trip delayed two days by windy weather, Boeing’s new 777X took its first flight on Saturday, Jan. 25 from Paine Field in Everett. It landed about four hours later at King County International Airport (KCIA), after flight testing over Eastern Washington and a flight-to-flight photo session over Mount Rainier. The jet roared down the runway, leaving a trail of spray from the rain as it ended its journey.

At least 40 media representatives – videographers, photographers and reporters – stood in a roped-off area near the control tower to record the end of the historic flight.

← Focus on values: We lead the way
Update on novel coronavirus, February 4 →