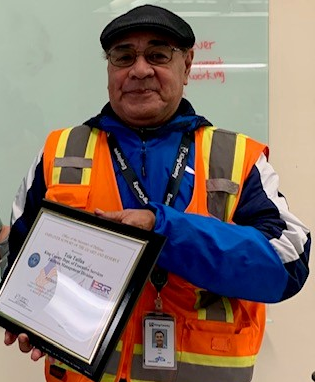 During the special online presentation hosted by the Veteran and Military Affinity Group, Teia Tuifua, a supervisor with the Facilities Management Division of the Department of Executive Services, was presented an ESGR Patriot Award. He was nominated for the award by Ryan Nelson, a 17-year employee with King County and a 16-year Coast Guard Reservist. “This will be my fourth deployment,” Nelson said. “Teia has always been a huge support for me whenever I have to leave for deployments and trainings.”

Capt. Michael Allen and Sgt. Diane Richardson of the Department of Adult and Juvenile Detention (DAJD) were also presented ESGR Patriot Awards in January. Corrections Officer and Reservist Michelle Helpenstell, nominated them both for the award.

“I nominated both my Shift Captain and my Scheduling Sergeant for the Patriot Award,” said Michelle Helpenstell. “As a leader in my unit, there have been several times that I would be called up for one or two days. This usually happens when an emergency has occurred with one of the personnel that I supervise, from a suicide attempt to a death in their family. I have had to contact my Scheduling Sergeant and Shift Captain with little or no notice and they have been beyond understanding that I need to go and assist my subordinate. It is situations like these that make me appreciate King County.”

The Department of Adult and Juvenile Detention boasts a large contingent of active and former military personnel in its workforce. Of more than 900 employees, at least 190 are veterans and more than two dozen have taken military leave during the past year.

“We know that these service members possess unique skills, ideas and perspectives,” King County Executive Dow Constantine said, “they bring a strong sense of duty” not only in civilian but in public service.

Supporting the National Guard and Reserve

Since 2015, 13 supervisors have been honored for their role in supporting their active duty King County employees.

Established in 1972, the Employer Support of the Guard and Reserve ESGR Patriot Awards promote cooperation between civilian employers and staff who serve in the military. The awards highlight special efforts supervisors make to support an employee’s military commitment.

An employee serving in the National Guard or Reserve, or the spouse of a Guard or Reserve member, may nominate individual supervisors and bosses for a Patriot Award. This distinction can reflect a wide range of assistance. This includes flexible schedules, time off before or after deployment, caring for families, and granting leaves of absence if needed.

King County offers a range of supports to employees who are serving in the military, including 21 days of paid military leave annually for required military duties, and supplemental pay when called to active duty and training. In addition, medical benefits are not impacted by a uniformed services leave, and vacation and sick leave continue to accrue while employees are on uniformed services leave.

← Fa’amomoi Masaniai to become first court judge of Samoan heritage in Washington state
Are you ready for winter weather? →