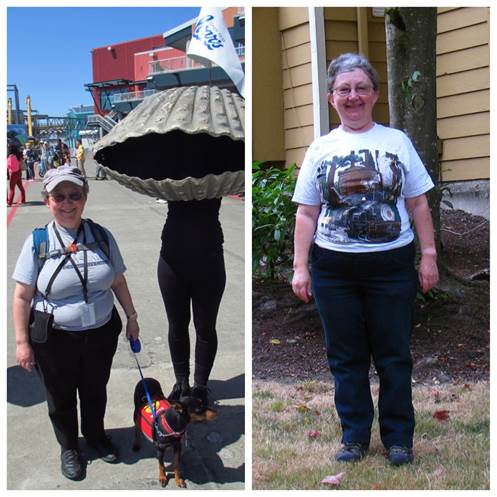 When Debra Billups’ nurse practitioner told her she wouldn’t keep her as a patient unless she changed her eating habits, Billups decided it was time for a lifestyle overhaul.

Billups, who helps customers with questions about their ORCA card auto-load in Metro Transit’s Customer Communication and Services group, was diagnosed in 2009 with osteoporosis, a condition of thinning bones and then diagnosed with asthma shortly thereafter. In January of 2012, she had 153 pounds on her 4-foot-6 ½-inch frame. In the summer of 2012, she lost 30 pounds and in the past two years, has been able to keep it off.

The main encouragement for getting healthy, Billups said, was her dog Shaka, a Manchester terrier with a lot of energy.

Billups was able to train Shaka as a service dog to assist her in activities that have become difficult since her osteoporosis and asthma diagnosis. When Billups drops something, Shaka is there to pick it up. If an asthma episode is coming and Billups doesn’t realize it, Shaka will let her know.

According to Billups, the key to maintaining a healthy lifestyle is through diet and exercise. She said she had to cut out foods like potato chips, Pepsi, anything fried and red meat. She says she doesn’t miss her old eating habits.

“I think I miss a French fry but I take a bite of it and I go ‘bleh,’” Billups said.

Since Billups can’t run, she and Shaka stay fit by going on long walks around their neighborhood and in downtown Seattle. In the winter when it’s too cold for outdoor walks, Billups said she’ll sometime go to the mall or do other indoor activities that allow for walking.

On top of the weight loss, Billups participates in Healthy Incentives, and has made achieved Gold status.

“The Healthy Incentives played a part of ‘oh hey, if I make Gold I can knock a few bucks off the med’s that I now need to take,’” Billups said.

Billups maintains Healthy Incentives’ Gold status by taking 2- to 3-mile walks around North Creek or Cascadia Community College in Bothell every weekday and going on walks, up to 10 miles in length, on the weekends. She incorporates baked fish into her diet at least three times a week and rarely goes out to eat at restaurants. She also makes sure to visit the doctor when necessary.

The 59-year-old said she wants to do as much as she can to stay healthy. Although osteoporosis and asthma aren’t curable, Billups said losing weight was a way to manage her symptoms.

After making a lifestyle change, Billups says she couldn’t have done it alone.

“Shaka was my shovel and she came at a time when I was planting seeds that I needed to make the change. The rake and the hoe? That’s where Healthy Incentives came into play,” Billups said.

Billups had some advice for others who want to live more healthily but don’t know where to start: “Don’t try and do this by yourself, find somebody you want to do this with. Don’t try taking it off at once; don’t try making the entire change at once. Don’t go all out if you’re older. Be in it for the long term and enjoy the sights along the way.”