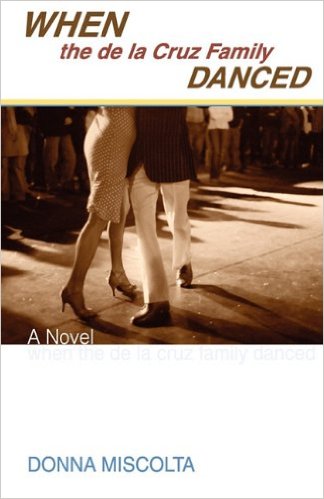 Posted on October 1, 2014 by Allison Northrop

King County employees do lots of interesting things in their “other lives” in addition to the work they do for King County. We’re sharing some of their stories in our “Other Lives” series.

While waiting for a flight to San Diego after her father had died, Donna Miscolta started writing a novel.

“I was thinking of my father who had come to the United States as an immigrant. He had never really talked about his experiences in the Philippines or his early years as an immigrant,” Miscolta said. “I sort of used that experience as a starting point in the novel.”

“When the de la Cruz Family Danced,” Miscolta’s first published novel, revolves around two characters’ immigration story from the Philippines to the U.S.

“We’re looking at two immigrants, but from different generations, and the similarities and differences in things they faced in terms of assimilating to the new country and culture,” Miscolta said.

At the County, Miscolta develops school programs and classroom presentations about waste reduction and recycling in the Recycling and Environmental Services section in the Solid Waste Division. She has been with the County for 26 years.

Miscolta has always been a reader, but it took a while to realize her desire to write.

“I was always in such awe of people who write. I loved reading, and when I was little it seemed like such an impossible thing to do,” Miscolta said.

Miscolta hypothesizes that part of the reason she didn’t start writing sooner was she couldn’t relate to the authors she read.

“The books that I found in the library and the books that were available to me, weren’t people I necessarily could relate to in terms of gender and ethnicity,” Miscolta said.

At age 39, Miscolta started to pursue writing. The first chapter of her published book was originally written for a University of Washington extension course writing class assignment.

Finding a publisher for the book took some time. Miscolta said she received a lot of positive feedback from publishers, but many said they didn’t know how to market the book.

She ended up publishing the first chapter in a literary magazine with a focus on Asian-themed work. Three months after it appeared in the publication, she got a call from a publisher in Hong Kong, called Signal 8 Press, wanting to read the entire manuscript. A week later the publisher offered her publication and the book was published in 2011.

Miscolta said she finds time to write after work or sometimes during her lunch break.

Currently, Miscolta is looking to publish a compilation of short stories and is working on her next novel The Education of Angie Rubio, that she describes as an episodic story of a young, Mexican American girl who learns lessons about race, gender, and belonging. Her short story collection was a finalist for the Flannery O’Connor award for short fiction and the Grace Paley short fiction prize.

Wishing to share her love for reading and writing, Miscolta is a member of Seattle7Writers, a nonprofit of “Pacific Northwest authors whose mission is to foster and support a passion for the written word in our community and everywhere.”

To learn more about Miscolta’s writing, visit her website here.