Watching out for salmon in King County Waters

It’s that time of year again. The time when King County’s many creeks and rivers begin to receive colourful salmon for their spawning season. Each fall, several salmon species make their way from the ocean into the Puget Sound and into King County’s urban and rural streams to lay their eggs.

It is an amazing natural process, Jennifer Vanderhoof said. As a senior ecologist for DNRP’s Watershed and Ecological Assessment, Vanderhoof coordinates a volunteer program to monitor salmon in the Lake Washington Watershed, called the Salmon Watcher Program. 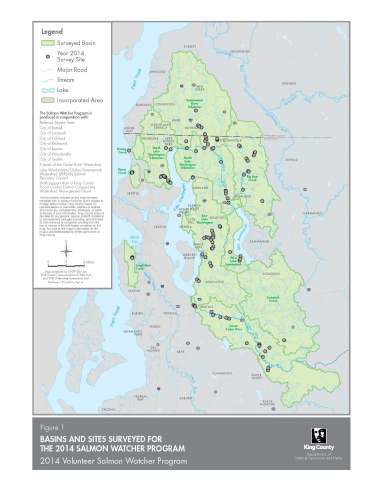 A multijurisdictional effort, the program trains and educates volunteers throughout the Lake Washington Watershed. Now in its 20th season, the Salmon Watcher Program operates in coordination with King County Water and Land Resources Division, Bellevue Stream Team, and the cities of Seattle, Bothell, Issaquah, Kirkland, Renton, and Redmond.

Through the trainings, volunteers are taught to identify the salmon they may see spawning in local streams. Volunteers also learn about the impact humans can have on salmon and what they can do to help, Vanderhoof said.

“It is things like not washing your car in the driveway,” she said. Soapy water runs into storm drains, which in most cases lead directly to streams, lakes and Puget Sound. The soapy water from home car washes contains metals, such as copper and zinc, which can cause problems for fish by affecting their ability to keep the right balance of ions in body fluids, particularly blood. Surfactants and fragrances from soap can reduce reproduction and impact the hormone balance in fish.

Volunteers attend one of four workshops after which they are assigned a site along a stream to watch over. They are asked to go out to their assigned location twice a week and watch quietly for fifteen minutes. Volunteers record the number of salmon they see – dead or alive. They are also asked if they saw anything that needed attention, and the volunteers are provided with spill response hotline numbers. The volunteers are referred to as “the eyes and ears of the watershed.”

Professional fish biologists can’t cover the entire watershed, which is why the data collected by volunteers is so important, Vanderhoof said.

“We can use the data to inform people doing restoration if there are salmon in their project streams,” Vanderhoof said. “We have expanded the known fish distribution in some of our streams through this program. Our volunteers have found Chinook in a few streams where they had not been previously documented.”

The Salmon Watcher Program typically has between a 60 and 80 percent return rate of volunteers and normally has about 120 volunteers through the September to December salmon spawning season.

“People love this program,” she said. Volunteers participate because they love nature and are interested in helping the environment and the fish.