Editor’s note: This article only uses first names to protect the privacy of minors. 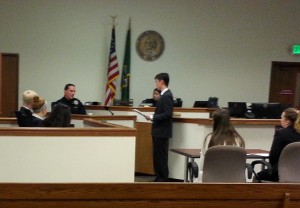 Each time 16-year-old “Mary” (not her real name) steps behind the wheel, she likely will be a safer driver thanks to lessons she learned at her Redmond Youth Court hearing.

Redmond Youth Court is a student-led organization that works with King County District Court to hear real cases of traffic citations issued to 16- and 17-year olds by Redmond Police within the City of Redmond, offering them an alternative to the traditional justice system. The cases are handled by youth “attorneys,” a youth “judge” and a youth jury, making it the ultimate “jury of your peers” for teenagers.

At the Dec. 3 youth court hearing, Mary and the student judge, jury and attorneys practiced the principles of restorative justice in evaluating several traffic violations she committed one night this past summer. In place of up to $679 in fines, the youth court recommended an alternative that Mary acknowledged will make her be “more aware of the harm I can cause while driving, and to be more careful.”

On an August evening soon after dark, the Redmond Police stopped Mary for speeding and for not having her headlights on for one block. When the officer approached the car, he also noticed a cellphone in Mary’s lap, with a visible text message conversation on it.  Additionally, the two passengers in the car were both under 20, in violation of Mary’s intermediate Washington state driver’s license restrictions.

The officer let Mary off with a verbal warning for speeding and having her headlights off, but cited her for transporting under-age passengers.

When all arguments were completed, the students, along with the community advocates’ witness, Redmond Police Officer Downing, participated in a restorative justice circle. Each person discussed what they learned from the case, and the harms that Mary could have caused to herself, her family, and the community, due to her driving errors. Similar to real jury deliberations, the students debated the pros and cons of imposing various amounts of community service hours, among other actions.

In the end, the Redmond Youth Court’s recommendation was for Mary to have her ticket dismissed, in light of her completing several actions:

King County District Court Judge Michael Finkle, who presides over the Redmond Youth Court, signed off on the proposed recommendations, which will be monitored by the Youth Court Team over the next six months.

In addition to benefitting teens with traffic citations and the community, Redmond Youth Court provides high school students with valuable real-world courtroom experience. “Youth court members learn decision making skills, compassion, how to work with others they do not go to school with, and a little about the law,” said Judge Finkle.

← Update on novel coronavirus, February 4
Four things you need to know for the Census   →